“Our Lawyers and Staff have a long history of knowledge, experience and a hands-on approach.” 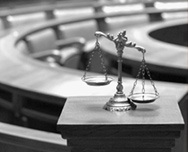 Scott P. Mussin is a co-owner and partner of one of Downriver Michigan’s leading law firms specializing in Family Law, Product Liability, Lemon Law, Police Misconduct/Constitutional Law, Commercial Litigation, Contracts, Auto Accident, Negligence, and Personal Injury. Mr. Mussin’s background as a Downriver Lawyer is one of extensive litigation and trial experience. While some attorneys are good desk attorneys, litigation attorneys’ practice in the court room. In this respect, Mr. Mussin has vast experience handling litigation cases and pursuing cases through trial. Working at Ford Motor Company in the Office of the General Counsel, Mr. Mussin is experienced with corporate structure and defense practices handling product and warranty litigation claims. After Ford Motor Company, Mr. Mussin went to work for The Liblang Law Firm, a boutique firm located in Birmingham, Michigan, specializing in Consumer Protection, Lemon Law, and Product Liability. Having obtained perspective from both the plaintiff and defense side of the practice of law, Mr. Mussin has a concrete foundation upon which to understand complex legal issues, assess and advise on cases from
both the Plaintiff and Defendant perspectives, and counsel clients on the merits of cases through trial.

Since leaving Ford Motor Company and the Liblang Law Firm, Mr. Mussin co-founded Mussin &
Scanland, PLLC in the Downriver Michigan area, where he could expand his practice to other
areas of law including Family Law- Custody/Divorce/and Support, Police Misconduct cases
prosecuting civil rights violations, and Personal Injury, Auto and Negligence cases. Mr.
Mussin’s litigation experience made these areas a natural fit and, having had great success in
numerous trials involving complex issues, Mr. Mussin is one of the leading Downriver attorneys
in Downriver Michigan.

Mr. Mussin has successfully transferred his trial experience to representing Downriver Michigan
clients in extensive Divorce and Custody trials, such as litigating a Personal Protect Order case
through six (6) days of trial to obtain a dismissal of false allegations, Five to eight day trials
involving sole legal and physical custody wherein Mr. Mussin’s clients were granted both legal
and physical custody of the minor children in six separate trials including imputation of over
$74,000 in yearly income to a defendant who claimed he had no income to pay support. In
addition to Family law trials, Mr. Mussin has successfully taken to trial, cases involving dog
bite defense in which claims were dismissed after trial, numerous Lemon Law cases where
clients were awarded a repurchase of their vehicle, and has settled numerous auto related
accident claims, police misconduct claims, and contract disputes.

Mr. Mussin, while working for one of the nation’s premier Proto-Chemical Companies obtained
his Juris Doctor, from Michigan State University, with a focus on litigation and contracts. Mr.
Mussin is licensed to practice in all Courts in the State of Michigan, the Michigan Court of
Appeals, the Michigan Supreme Court, and both the Federal District Court for the Eastern
District of Michigan and the Federal Bankruptcy Court for the Eastern District of Michigan.
Since obtaining his law Degree, Mr. Mussin has been associated with the National Association
for Consumer Advocates, The National Association for Consumer Bankruptcy Attorneys, the
Detroit Metropolitan Bar Association, the Downriver Bar Association, Michigan Association for
Justice, and the Consumer Law, Litigation, Family Law, and Negligence sections of the
Michigan Bar Association.

A persuasive and successful trial lawyer, Jerard captures the respect of clients and jurors alike.
Indeed, jurors have praised his “skills” and called him simply, “the Pitbull.”
A graduate of the Thomas M. Cooley Law School, Jerard interned with the Wayne County
Prosecutors Office in the appellate, trial and forfeiture divisions. As an intern, Jerard was
entrusted with assignments involving Kwame Kilpatrick.

Jerard Scanland, who practices law in Southgate, Michigan, was selected to Rising Stars for
2019. This peer designation is awarded only to a select number of accomplished attorneys in
each state. The Rising Stars selection process considers peer recognition, professional
achievement in legal practice, and other cogent factors.

About our Law Firm:

Our law firm is dedicated to providing our clients with expert and specialized legal advice in an efficient, professional and affordable manner, at your convenience.